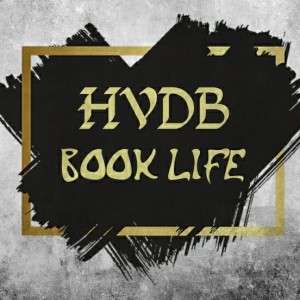 Ana Balen was born in Zagreb, Croatia, where she still lives with her husband, their son (read boss!) and the son’s pet rabbit named Shhh! (or some other gibberish that’s the favorite of their son for the day.)
She spends her days driving her husband up the wall (when he can’t get her ass up from the bed in the mornings), reading and daydreaming, or following orders from a five-year old. In the hectic life she leads (and loves every second of it), she never thought about writing. But, then one day a name popped in her head, then, the snippets of things, and she sat down and started typing. Next thing, she wrote a book. And now, she’s trying to write another one 😉 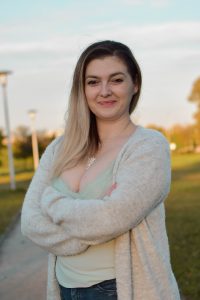 Where are you from?
“I live in Zagreb, Croatia. I lived here all my life and honestly, I couldn’t imagine being anywhere else. The history and the vibe of the city is something that inspires multiple stories.”

What is your favorite genre to read/write?
“I love to read and I will read almost anything (the only exception is horror because I don’t like to be scared…LOL) but my most favorite is romance. I just love the promise of an exciting start of a new relationship, then going right along with the characters and experiencing the journey to their HEA.”

When did you first realize you wanted to be an author?
“I started dabble in writing when I was around 14. Then I discovered boys so writing took a backseat for a while. Then again, at 20 the love for writing poked its head back up, but then, I met my husband. D you see the pattern?! LOL. It was after the experience my husband and I had that I finally stopped and listen to what my heart was saying. A year later, I published my debut book Wishing For A Star.”

Who/What inspired you to write the Good Intentions series?
“It wasn’t just a single person or a single situation. One night we had our friends over and as you do, we asked about our mutual friends and then we heard about their situation. The next day, I sat my husband down and had a long conversation with him, at the end of which we both promised to each other that, if there’s ever a time that we’re not happy in our marriage or we met someone who we want to be with, to tell each other. After that conversation, I started thinking how I know more and more people that are miserable in their marriage or how they don’t respect their partners enough and start cheating on them. And as it goes, the ore you stat thinking or talking about something, eventually that’s all you’re going to hear or see. It really was interesting to me who someone could or would justify infidelity and that’s how the idea for Good Intentions was born.”

What was the highlight of writing the Good Intensions series?
“It was the fact that I made all three characters equally responsible for what happened. IF you look at it, you can justify Claire, Heather and Nick. But if you look on the other side, you can also find them guilty for it. Oh, and also, writing the end on the final installment. It was more profound for Good Intentions than it’s with any of my other books because it was really hard writing those characters because they did something I’m not okay with in any way.”

How many books have you written? Which is your favorite?
“I’ve written 7 books so far and am in process of writing 3 right now. It’s not easy to write multiple books at once and I have no idea how it happened but all these voices keep shouting in my mind and they fight who will tell me their story first that I just caved and started writing it all at once. (I promise I’m not crazy)”

“I know I’m not supposed to say this so openly, but my favorite is Wishing For A Star. If you want to know why, you’ll just have to read it. It’s pretty obvious why when you finish it.”

Tell us about your first published book? What was the journey like?
“Ahh… Wishing For A Star.”

“It was hard to write that book, I won’t lie. It took me a solid year to write those magical words THE END. And not only because I had no idea what I was doing but also, I had a newborn son. I consider it our success because he was really quiet when mommy was writing. It was almost as if he knew I needed to concentrate.” 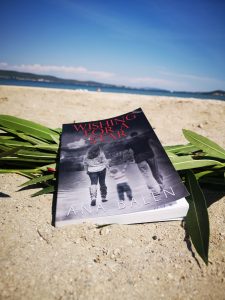 Can we expect any new releases in 2021 and share details?
“Yes. I have three books planned for this year. And I know it’s almost the end of July, so they will be coming at you fast.”

“Unfortunately, I can’t share any details just yet, but when the time comes, I’ll shout it from the rooftops.”

What do you think makes a great story?
“An experience of characters (let that be an actual occurrence or an emotion) that people can relate to or character that have real flaws.”

“You can’t feel compassion if you don’t know what the writer is trying to say and the only way to know is if you felt it, experienced it or even just heard about it from someone in your life.”

What advice would you give a new writer, someone just starting?
“Not to give up. Every writing hits a roadblock. The key to get to the point of publishing your book is not giving up. Go back to your manuscript every day. It doesn’t matter if you wrote 2 or 2k words that day. What matters is, you wrote something.”
“And read, read as much as you can.” 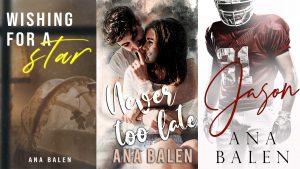 1 Winner: A Signed paperback of Wishing For A Star and Never Too Late.
2 Winners: An ebook of Jason.

We want to thank Ana Balen for signing up for the Weekly Author Spotlight.

The interview was done by HVDB Book Life

BLURB When Dirty Riches have taught you how to rock, the rest don’t stand a chance! Summer has arrived and all the